No words can describe the whole of the event. Now that the countdown to next year hovers around 350 days, the post-event depression gnaws at those attendees who have embraced their changed souls. The longing to return is strong, the memories fresh. Time will once again transform the depression and longing to excitement and joy.

But today I sit in the dark and long to return to the dust. 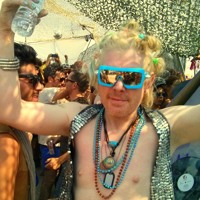 2012 added another virgin Nuke (later changed nickname to Callahan) as well.  At camp we met Jade’s dad Shutter,  and Lanny.  In 2012, the g-spotless camp was not able to return to G & 2:30 as it had the previous two years because the old campsite was taken, so it moved to I & 2:30 and changed its name to G-Spotless.

2013 introduced two virgins, The Wiz and Marmite, and saw G-Spotless move to G & 6:30, with a flood of new characters participating in the camp — some for 5 minutes, others for 5 days.

Meet the people of G-Spotless…